November 11 – 14  Left for Madrid and the Carmelitas at Santa Ana in Seville. I arrived in Madrid on the 12th and took a plane for Seville. On arrival I fortunately met a taxi driver and took a taxi from the airport to the convent about 20 minutes away. I also set up for him to come and pick me up when I left, his name was Francesco.

I was met by La Madre Prioria (.  ) and one of the German Monja and there found out the Monjas follow a strict closure. That is they do not leave the convent and no one comes in contact with them except through a steel grate divider or a small turn style which they also use for passing things in and out of the convent.(photographed below). It was a geat visit I participated in their prayer day and tried to keep up with them!! They also cooked for me three times a day!! It was one of the best visits of the trip and they stiil remain in my heart as I am writing this.

Seville is more than 2,000 years old. The passage of the various civilizations instrumental in its growth has left the city a distinct personality, and a large and well-preserved historical center. Although it has a strong medieval, renaissance and baroque heritage, the city was greatly influenced by Arabic culture.
In mythology, the founder of the city is considered to be Hercules. The city was known from Roman times as Hispalis. The nearby Roman city of Italica, a mainly residential city at the time, is well-preserved and gives an impression of how Hispalis may have looked in the later Roman period. Important remains also exist in the nearby city of Carmona. Existing Roman features in Seville include the remnants of an aqueduct, a temple in Mármoles street and vestiges of the walls surrounding the city that was ordered built by Julius Caesar. A sample of these walls in a state of good preservation can be seen next to the Basilica of the Virgen Macarena. Following Roman rule, there were successive conquests of the Roman province of Hispania Baetica by the Vandals and the Visigoths during the 5th and 6th centuries.

SEE ALL THE PHOTOS OF SEVILLE 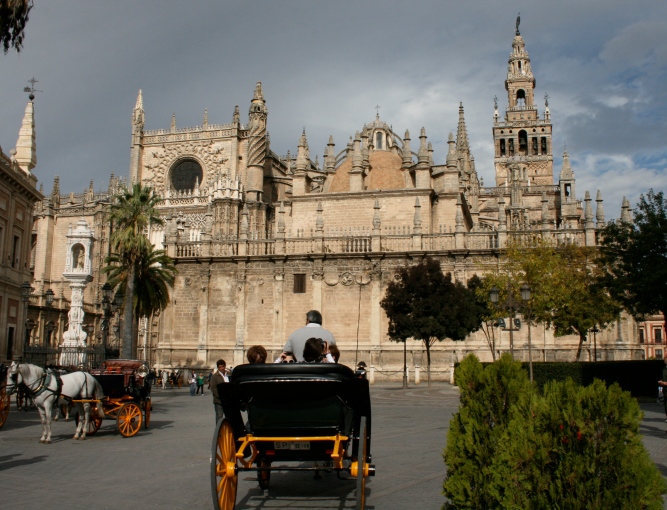